One Summer to Remember

A live streaming reunion with castmates of the 1983 TV series One Summer David Morrissey and Spencer Leigh hosted by writer, broadcaster and cultural historian Matthew Sweet

To celebrate the HD restoration of this iconic series and help raise funds for the Liverpool Everyman and Playhouse Theatres a special reunion will take place on Thursday 19th November at 7:30pm GMT as writer, broadcaster and cultural historian Matthew Sweet will be joined by actors David Morrissey and Spencer Leigh live online to discuss their experience on this ground-breaking series.

David fondly remembers his time on the series, remarking ahead of the reunion that “One Summer was the most important job of my life. Without it I would never have got the start I needed to pursue this wonderful career that I love so much!” sentiments mirrored by his co-star, Spencer, recounting it as “one of the happiest experiences of my life. I’m delighted that it has found an audience and inspired many people.”

Have questions for the cast? Submit your questions on social media using, using the hashtag #OneSummerbefore and during the live stream. Remember to tag us: @networktweets @LivEveryPlay

As the days get shorter and while we cannot be together in person this exclusive live ‘night-in’ can give us a chance to reminisce about that One Summer we would rather remember.

Network will be collaborating with Liverpool Everyman & Playhouse Theatres to help raise funds for Young Everyman Playhouse to help them continue their important work with the next generation of theatre practitioners. The organisation, which has seen its doors closed once again due to the ongoing coronavirus pandemic, played an important part in the early careers of David Morrissey and Spencer Leigh, who found their feet on the boards of the theatre before landing their roles on One Summer. To donate to YEP please visit their page HERE. A percentage of all One Summer Blu-ray sales made via networkonair.com will also be donated to the charity.

“We’re really grateful to be a part of this Q&A with Everyman Youth Theatre alumni David and Spencer, and would like to thank Network Distributing for choosing to support Young Everyman Playhouse. The money raised will help nurture the creative talents of the next generation of young theatre makers coming out of Liverpool.” Matt Rutter, Young Everyman Playhouse director

After almost 15 years since the DVD release, One Summer is getting a facelift, with the series remastered from original film elements, and re-released on Blu-ray by Network.

To celebrate the release I’m rebuilding the website as it’s looking pretty dated these days. It will take me a while to migrate content over, but I’m putting the first daft up now – you can still view all the old website content at www.one-summer.tv83.net

A new detailed page on One Summer has been added to Willy Russell’s website, and is worth checking out: www.willyrussell.com/onesummer.html (It looks like the plan for a film version is still on!)

I’m aware that I haven’t updated the site for a while, and the odd email from visitors has made me guilty enough to make me pop back and record a bit of a sign-off.
I never dreamed when I started this website that it would bring together so many people, lead me to meet a lot of the people involved in One Summer, and ultimately the production a great DVD.
None of that would have happened but for the tremendous support from visitors to the site, and other fans of ‘One Summer’.
Now that that’s done I feel that the project has come to a natural conclusion for me, and I’m happy to leave the site as it is. Of course if you have something to say, or just want to have a chat feel free to email, post on the guestbook etc etc!

Well it’s the 23rd here in Australia at least, and the official release date of One Summer. For those lucky enough to receive advanced shipments, you will be watching as I type, for the rest, it should only be a few days to wait!
My copy arrived on the doorstep this afternoon, but I won’t comment yet, so not to make everyone else jealous! (And besides, I haven’t had time to watch it yet…)
In other unrelated matters, I decided it was probably time to retire the ‘New Year’ cheer, so the front page picture has gone back to normal. 2005’s Christmas pic by David B is archived here. (Inspired as always)

Mailout sent yesterday announcing confirmed extras. Note that AOL users emails have to be removed for the distribution list due to AOL’s rather extreme spam policies. Please supply a non-AOL address if you are one of those affected.
The release date for the DVD has been delayed a week and is now due on the 23rd January. (Small price to pay for all those extras!)

Great news from Tim Beddows, the Managing Director at Network DVD. He has confirmed the following features on the upcoming DVD:-

And here is a snapshop of ‘the boys’ taking a break from recording commentaries for the DVD yesterday: David Morrissey, Spencer Leigh & Ian Hart 16/12/05 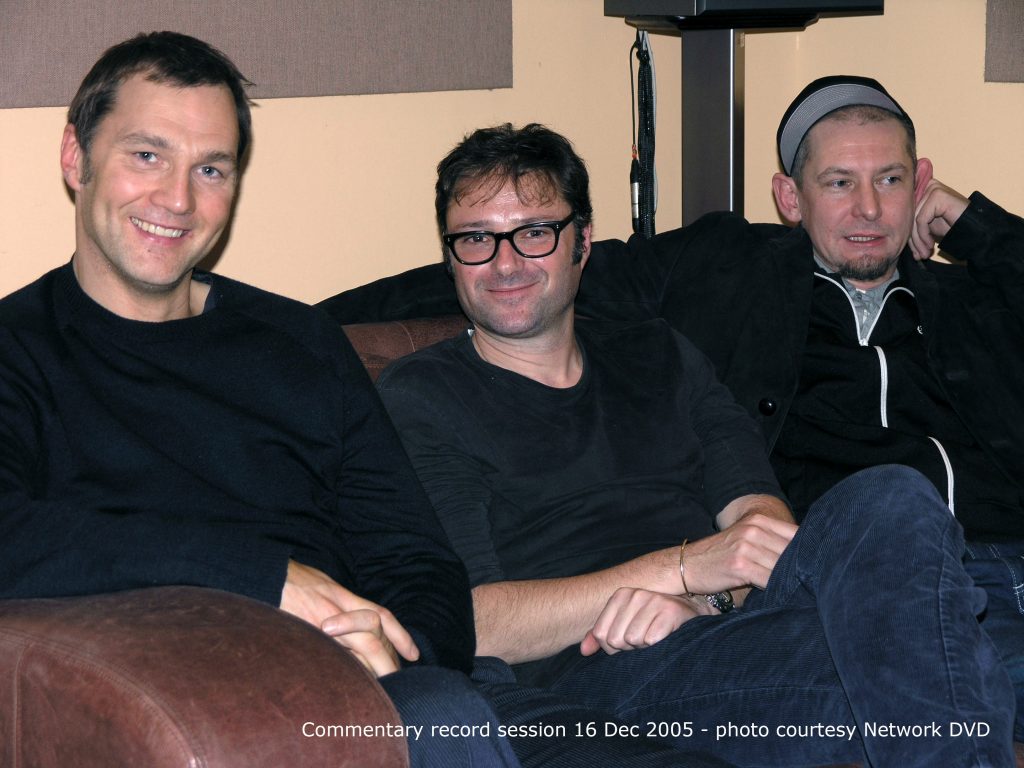 Sent out an email to all newsletter subscribers (wow – there’s more than 400 of you now!) with a quick heads up on the DVD. You can also check out the details on the Network DVD site here. (new link)

I’ve been contacted by several people to point out the series is now appearing for preorder on some sites. If you would like to support the costs of running this site, you can preorder from Amazon using this affiliates link: One Summer at Amazon.co.uk

We use cookies on our website to give you the most relevant experience by remembering your preferences and repeat visits. By clicking “Accept”, you consent to the use of ALL the cookies.
Cookie settingsACCEPT
Manage consent

Any cookies that may not be particularly necessary for the website to function and is used specifically to collect user personal data via analytics, ads, other embedded contents are termed as non-necessary cookies. It is mandatory to procure user consent prior to running these cookies on your website.